Anikó: The Stranger Who Loved Me

Talented YA author Michael Thal has a list of the 5 best books he's reviewed in a year. For 2017, he has chosen Guardian Angel as his favourite, and Anikó: The stranger who loved me as the second.

Each year, Carolyn Howard-Johnson selects a number of books she considers to be innovative, pleasurable to read and with an addition to knowledge and understanding. I am honored that she has included this biography in her 2006 list.

This book won its category in the EPPIE2004 Awards.

The first page won the second prize out of 281 entries in the 'first page' contest held by the New Zealand Writers in November, 2002.

Ervin Molnár-Tarján, my cousin in Hungary, has had this book translated into Hungarian, and sent me a boxful. You can buy copies autographed by me for $Au20 + postage. 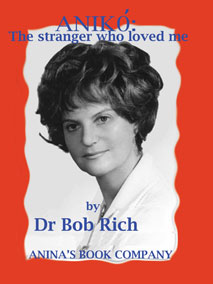 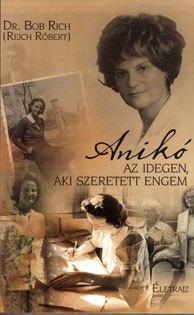 Click a thumbnail to see the full size cover.

Paypal allows you to send a message with your payment. If buying the paperback, please state your name and postal address. If the book is a gift for someone else, say so in order to make sure I autograph it to the right person.

Thanks to Victor Volkman, publisher at Loving Healing Press, Anikó is now available in modern formats:

If you have read and enjoyed this book, I'd LOVE you to review it!

I've always thought that 'an aching heart' was a cliché, a metaphor, a mere turn of phrase. But during my daily visits to my dying mother, I learn that it is an exact description. My heart is where I feel the pain of grief.

Oh, I don't cry, even in private. I haven't cried since childhood. When I am with her, in the antique and under-equipped hospital room, I pretend to be cheerful and optimistic, pretend that of course she'll get better. We both know that she never will.

I watch the solid, muscular body of my brother as he bends over her. His ear is almost touching her lips, so he can hear the less-than whisper of her voice. He repeats whatever he thinks she has said, waiting for the nod or shake of her head before bending over again. She is giving instructions, about paying the car insurance on time, about reading the water meter. She lists the names of people to telephone because they should be able to help me with my book about her life. It's to be my memorial to her, but, even on her deathbed, she is my research officer.

The thinking part of her brain could still vie with a chess champion. Everything else is dying.

She has given me hundreds of images. They are her flashbacks, but I can see them.

I see her as a child, cosseted in a loving family, though one rent by emotion. During the Great Depression of the 1930s, she had a holiday in Italy, attended wonderful family parties, learned to play the piano.

I see her as a young woman, the mother roaming bomb-torn Budapest, risking torture and death for food, and to seek safety for her loved ones. Along devastated streets she pushed my pram, using my blond hair as a disguise. These streets were covered by snow, the rubble of fallen buildings and the gore of victims. The hated yellow star was missing off her coat, and yet a single hostile pre-war acquaintance could have been our death sentence.

I know she can be hard as a mace and soft as a parachute, daring, imaginative and successful. I feel her pain, when she had to choose between her love and her child. I share her success against all the odds, as she built a million-dollar export business despite every handicap that prejudice, criminal action and bureaucracy could throw in her way.

And I see her as an old woman, lovingly caring for the husk her husband had become.

I have plaited a story from two strands, two strands from opposite sides of the globe, about two people whom circumstances have made into opposites in so many ways: woman and man, a generation apart, religious Jew and unbeliever, one firmly rooted in Europe, the other transplanted and now thoroughly Australian.

And yet, in that bleak hospital room, we have come together again, for the last time: I and the stranger who loved me.

2nd Place - The Stranger Who Loved Me
by Dr Bob Rich of Victoria, Australia

Vivid gripping prose that plays the emotional card very, very well indeed. The images, which are delivered in so few carefully chosen words, fair leapt off the page. It takes a lot to reach the heartstrings of this very cynical reader, but this author certainly did.

If the momentum of this first page can be maintained there is best-seller written all over The Stranger Who Loved Me. If the author hasn't yet got a contract, there should be one just around the corner.

I am a typically traumatised war baby. For one thing, my first clear memory is at five years of age.

The big room is dark, the well-known furniture has turned into shadow monsters like on every night. Not that I'm scared. They are familiar, friendly monsters, characters in the stories of my imagination. The yellow glow of a streetlight below casts odd-shaped stripes on the ceiling, and the red and blue neon sign across the road flashes on, off, on, off, rhythmically colouring my world. There is music too. I hear a band playing at the Bistro down the road.

All this is usual.

Also usual is the sound of angry, raised voices through the closed double doors. I can see a rectangular golden line where the light seeps around the door's edges.

I am nearly asleep when the door abruptly opens. A distorted golden oblong of light sprawls across the carpet, and Mother runs in, shutting the door behind her. She comes to my bed, sobbing very softly. She reaches down, trying to hug me. As always, I pull away from physical contact.

Again the door opens. I see Father's silhouette, the moustache unmistakeable. The two adults stand next to my bed, shouting at each other in whispers. Their words are figuratively as well as literally over my head. I understand nothing but the emotion.

Suddenly, Father gives Mother a hard shove so she falls across me, then he is gone.

Once more Mother reaches out to cuddle me. This time, I am too terrified to resist.

This event was seared into Anikó's memory too.

At least she was on her own ground, in her family's flat. It was no longer Tibor's home. She took comfort from the old, familiar baroque furniture that had survived the War by some miracle; intricately carved, red-upholstered friends. She stood, facing three men: her husband, his lawyer and her lawyer. They were the enemy, united against her.

Árnold, paid to represent her interests, told her very condescendingly, "My dear Anni, I can do nothing, it is the law."

She could hardly draw breath, so angry was she. Her jaws hurt from the tension of fury. She looked at Tibor, his round handsome face, his gymnast's body. His eyes were glowing with hate and hurt, and she wondered how she could ever have loved him. "I will not give up my son," she managed to say.

Árnold still sounded like a teacher addressing a stupid child. He looked down his nose at her, as if her short stature was somehow shameful. "In Hungarian law, in the event of a divorce, girl children go to the mother, boy children to the father. The only exception is if there is demonstrated reason why that parent would be unsuitable. And Tibor has done nothing reprehensible "

"Nothing?" She heard the shrillness in her shout, but didn't care. "As soon as the Germans came, FOR A WHOLE YEAR, he safely cowered in the back room of a hospital, while I risked everything to keep that child alive. He is mine. You " she glared at her husband, " have lost all right to him, as you have to me."

Árnold waved an agitated hand. "Anni, that's not relevant in law. He is the father..."

Anikó again shouted over him. "Oh yes? Well, listen here, you all so mighty males. If this goes to court, I'll stand in the witness box and swear that he is not the father!"

All three men gasped. The other lawyer spoke first. "That... that will destroy you socially. No lady could--"

"Well this lady certainly will!" With a sob she whirled, and ran into the darkened room where her son slept.

But Tibor came after her within seconds. "How could you say that? You know it's a lie!"

He was not a tall man, but seemed to tower over her. "He's the child of our love!"

"What do you know of love? Coward!"

Without warning, he shoved her hard so that she collapsed across the low bed, then he stormed out, slamming the door behind him.

She'd won. Why then did she feel so devastated?